Marriages fail because of pure selfishness and stubbornness. If a person is not willing to forgive you pray for them with the love of God and a pure heart. It’s easy to see your mate’s faults but it’s hard as hell to accept that you have deficiencies, too.
The courts are flooded with the business of executing divorces. The day you vowed to accept, love, respect, cherish, provide and forsake others was not a game. You made a covenant with God and your spouse. The question is, did you really want to follow God’s instruction concerning marriage? Marriage is not about going through the motions; it needs to be taken seriously.
Love is free and accepting but devotion is loyalty and commitment. Marriage takes two committed people to make a decision to work things out no matter what! Don’t allow your hatred to cause you to destroy your covenant . Take inventory of your life and your own truths.
So many people destroy the gift that God has given them. When your spouse is sick and tired of the petty nonsense, lack of caring and commitment, they have reached a breaking point. There is absolutely no turning back. When it’s over; it is over. It’s not always about being right, holding grudges, or having a “I don’t give a damn” spirit. What you don’t cherish someone is waiting in the wings to scoop up what you have discarded: your spouse. I promise you once you come to your senses, you will realize the pain and lack of love you inflicted on your gift from God. God WILL bring it to your remembrance.
What really matters to you?
My prayer today is that couples who have reached the brink of falling out of love will take heed and recognize that your marriage is worth saving.
#forgive
#chooselove 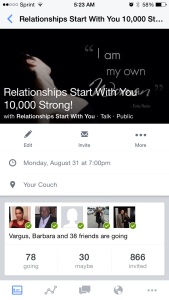 Good morning RSWY Loyal Fans!
We have 16 days until the 10,000 Strong Rally. Thanks to each of you that are fully committed to seeing this through. It’s not about the number 10,000 but the support of those who believe that RSWY can change a woman or a couple’s life one person at a time. I am determined to share my story and reach the masses! There will be an upcoming video from me along with a question and answer session. Two lucky people will win a 15 minute session with me. You do not have to live in my area to win but you must participate in the event.
RSWY is on the move and my prayer is that hearts will be healed, careers will come to fruition and healthy relationships are formed.
Again many thanks for your loyalty,
Gwendolyn END_OF_DOCUMENT_TOKEN_TO_BE_REPLACED

Even if you feel alone, know that you are not. God is there and all you have to do is ask Him to comfort you and fill the void in your life. I believe what God says. Yes, I get weary and the tears fall down my face. That is my way of releasing those heavy weights. Then, I remember that my family loves me unconditionally and they are a phone call away!
He knows what we need and He will get rid of people and things that are not good for us. Keep loving!!! Keep giving!!! Keep serving God!!! It will pay off!!!
#Godbeafencearoundme!

A person can tell you everyday how much they love you. If their actions don’t match their words then you know how they really feel about you. In a relationship, you will hit some “bumps in the road.” However, a God-centered relationship will flourish. It is never harsh, hurtful, or degrading. When you love someone, you don’t want their heart broken. You will do everything humanly possible to resolve the problem. The Word of God teaches us what genuine love is:
1 Corinthians 13:4-13 (my favorite scripture)
Love is kind and patient, never jealous, boastful, proud, or rude.
Love isn’t selfish or quick tempered. It doesn’t keep a record
of wrongs that others do. Love rejoices in the truth, but not in evil.
Love is always supportive, loyal, hopeful, and trusting.
LOVE NEVER FAILS!!!

Love doesn’t break your heart! Love is action not words!

4 Love is patient, love is kind. It does not envy, it does not boast, it is not proud. 5 It does not dishonor others, it is not self-seeking, it is not easily angered, it keeps no record of wrongs. 6 Love does not delight in evil but rejoices with the truth. 7 It always protects, always trusts, always hopes, always perseveres.

RSWY is so excited about the upcoming series: Women and Relationships. Some of the candid topics will be STD’s, Loving Yourself,Surviving a Relationship Breakup, Being a Mother, Women and Careers and many more. 2013 is the year for empowering women!!! The series will be interactive and I would love to share some of your stories (inbox /message me and of course they will be posted anonymously). Ladies get your journals!!!
Happy Holidays!!!
RSWY

I am the CEO of Relationships Start With You. We assists women who are dealing with low self-esteem, poor body image and are struggling with life’s difficult transitions. We offer candid motivational speaking, interactive workshops, freelance writing and family and community outreach services. 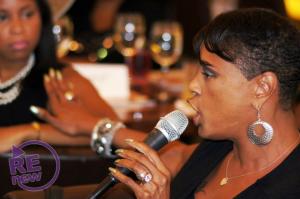 I am an advocate for women who are broken and have given up on life. I triumphed and overcame a devastating divorce, low self-esteem, a life-threatening illness, and job loss.I decided to follow my calling and create my life’s work Relationships Start with You. RSWY transforms lives through self-discovery by letting go of the past, forgiving others, loving yourself unconditionally, and having healthy relationships. I am seeking opportunities to spread the word about women’s issue on how to repair brokenness and despair i.e. radio, television,writing, guest spots, symposiums and motivational speaking.

At some point in Angela‘s life, she believed that she was unattractive and no one could love her. Was it her parents, sibling or mean-spirited kids at school that planted those seeds of self-hatred? Let’s get to the bottom of Angela’s problem.

Angela has a younger sister named Tiffany who is thin, fair skinned and gorgeous. Family members dote on Tiffany; she’s outgoing and loves to be the center of attention. Angela is the opposite and feels invisible. She often goes to her room unnoticed, gets a candy bar out of her nightstand drawer and eats her comfort food; it temporarily pacifies her. Later, misery and shame sets in so she gets mad at herself for indulging.

Angela and Tiffany are now young women and they lead different lives. Tiffany finishes college and gets married to a wealthy stockbroker. Angela is single, lonely and works at a department store as a sales associate. At family gatherings, Tiffany always tells everyone how she loves being a housewife and shares stories about her rich counterparts. Angela, on the other hand, compares her life  to Tiffany’s and it causes her to feel inadequate and a disappointment to her family.

One day a tall, dark and handsome gentleman named Richard approaches Angela at her job and ask her out. She reluctantly says yes and is shocked that a good looking man would even notice her.They meet at the movies because she feels uncomfortable riding with him. After the movies, Richard has to leave because he receives an important phone call; it is his girlfriend. Of course, he doesn’t share that piece of information with Angela.

At the beginning, they are close, spend most of their evenings together and have discussed the possibility of marriage. As time passes, Angela falls in love with Richard. She wants to introduce him to her parents but he’s not ready. Richard acknowledges (to himself) that the only reason he is with Angela is because she pays his bills, splurges on clothes,jewelry and other essentials.

Richard slowly pulls away from her. Poor Angela feels the only way she can keep him is to continue to shower him with gifts and money so that he won’t leave her. She views herself as unattractive, overweight and unlovable. Angela is willing to keep Richard around because she doesn’t want to feel like a misfit.  What is wrong with this picture?

Angela is allowing Richard to take advantage of her because she doesn’t love herself. It is more important to her to have a piece of him, however, he is totally disconnected. He’s gotten everything he needs and wants out of  her. He finally tells Angela that he wants out.She refuses to accept that the fling is over.

As a result of being rejected, Angela experiences humiliation, depression, and devastation. The mental picture she has of herself  has nothing to do with being valued, loved, accepted, and thought well of by others. When she looks in the mirror, she ask herself,” why can’t I look like Tiffany and how do I get others to value, love, and accept me.”

The harsh reality is people see you the way you perceive yourself. First, Angela has to admit that she was used by Richard because she did not regard herself as lovable. Consequently, the first man that gave her attention had ulterior motives and she allowed it.  A life coach can help her begin seeing herself in a different light.Secondly, the self-hatred stemmed from her childhood. The problem with most women is they value themselves based on how others see or treat them . Love comes from within and you don’t have to be pretty and thin to be loved by others.We come in all shapes, colors and sizes; that’s what makes us unique.

Ladies, we are fearfully and wonderfully made by the creator, God.