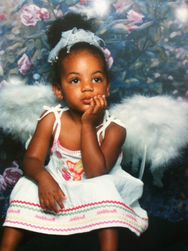 Child Starved to Death            Later Burned and Thrown in a Trash Can
Picture: Coutesy of Robin Moss

I am troubled by society and the handling of abusive parents. A beautiful little girl, Emani Moss  (10) was starved and burned at the hands of her father and stepmother in Georgia. What happened to the nosey neighbor that reported everything? Where is our compassion for others; especially, defenseless children? We MUST take a stand and stop the violence against children at the hands of their own relatives and  even strangers.

Children are defenseless! If we do not help them, then shame on us!!!  Her stepmother and father were ordered to attend parenting class . Once they completed the course, Emani was returned to them. Her grandmother fought to keep her but was denied. This little girl will never attend her prom, get married, have children and a career. She was robbed of having a loving home with parents who nutured, loved and protected her. Her life meant nothing to the people who starved, burned and threw her in the trash can like a discarded object.

If you suspect abuse, report it! Call the police; contact the media. Do not stand by and watch a defenseless child have the life literally sucked out of them. There are many others who are abused and no one wants to get involved; thus, it is not reported until it is too late.  People care more about their animals than they do a helpless human being. The court system gives harsher punishment in an animal cruelty case because if the child does not have visible signs (bruising, scars, broken limbs) they find it difficult to prosecute the perpetrator . Laws need to be changed so that senseless killing of children can cease.

(Real Talk) Ladies, I just answered a question on Black Parents United ( please support): Is it appropriate to allow your boyfriend ( not the father) to discipline your child/children? (paraphrased) This is a pet peeve of mine. How could you allow a man ,that you are dating/boyfriend, to put his hands on your child? If he is not the father or your husband, you are out of line!!! We read online and hear on the news everyday about children being severely abused, tortured and even killed by a non- parent. MOTHERS protect your children. I realize there are different scenarios but you should set boundaries. If you are married to a man who is not the biological father, there needs to be a discussion and parameters set as to how/who disciplines the child/children. There are some excellent step-fathers out there who are loving and nurturing so kudos to you!!! But, this post is in reference to abusive boyfriends and sometimes step-fathers. Ladies, don’t EVER forget that your role is to protect your children!!! ( I am not trying to offend anyone; I am speaking out of love and being a voice for children.)
P.S. I would be in jail smoking cigarettes and I have asthma!!! You mess with my kids, I am going to have a state issued number across my chest!